Saying No to Trident

I haven’t blogged about my activity with the Say No to Trident group on LibDem Act website and I don’t know why this should be the case.  It was set up in December 2009 following my first (and I have to admit, failed) project to generate discussion on the issue of nuclear weapons – Letters of Last Legacy.  The concept of this was very simple.  In each Trident-armed submarine there is a letter from the Prime Minister, in which are his or her personal views on whether Britain’s nuclear weapons should be used if Britain had already suffered a nuclear first strike, killing or disabling the mechanisms of statehood, command and control.   I invited people to imagine if it was their own letter that was to be read by the captain and crew.
After an initial surge, the contributions dried up.  But one of the correspondents, Rebekah Gronowski, urged me to set up a group on the newly-formed Liberal Democrat ACT site.  I decided against transferring the concept across but rather went for a more simple message: Say No to Trident.

It rapidly became apparent that most group members wanted more than merely to be rid of the Trident system, but rather to ditch Britain’s ownership of nuclear weapons completely.  Since this is also my own view it was an easy path to take.  But I know if we had stuck to the more conservative line of “no like-for-like replacement of Trident”, the group would have had much wider support that it’s current membership of fifty nine.  Both Nick Clegg and Tavish Scott (the Scottish leader of the Liberal Democrats for you folk residing south of the Wall)  have come out on that stance.  One member of ACT even wrote to me, explaining that he would not be joining Say No to Trident precisely because of our unilateralist views; he did however support the scrapping of the Cold War system.

I am indebted however to Dan Fawcett who has directed the group’s attention to a speech by Nick Clegg of the 10th of March, in which he states

Need I ask how encouraging this that?  As a group, we wrote to Sir Menzies  Campbell who is currently drafting a defence review for the party.  It is not due out until after the general election but we are becoming more hopeful that our message is coming better supported among the leadership of the party.

Now I know that a lot of people in the Liberal Democrats have been campaigning for the party to go unilateral for a long time.  I remember all-to-well being appalled at the activities of the Greenham  Common Women as relayed to me by fellow party members who were also active Greenham protesters,  in a conversation during a party conference in the early 1990s.  Well, I glad to be able to tell you that people can change.  I took part in my first peace march last weekend.  The main point however is that ideas, if they have merit, are kept alive by such worthy and good people until their time comes.  Sometimes, that does indeed take generations.  The Say No to Trident group may be a newcomer to the fight but, if we are successful in our aim to change party policy, it will be mostly due to the long term supporters of unilateralism within the party.

Here is an invitation to you: come, join us and help Britain face the 21st. Century without being burdened with these unnecessary and dreadful weapons.  How can we claim to be a party with the green thread of environmental awareness running through every policy then turn around and support the ownership of the most poisonous, polluting and destructive weapons on the face of the planet?

It cannot be so.

Do something about it, right now.  Join Say No to Trident and, if you are not a member already, join the Liberal Democrats. 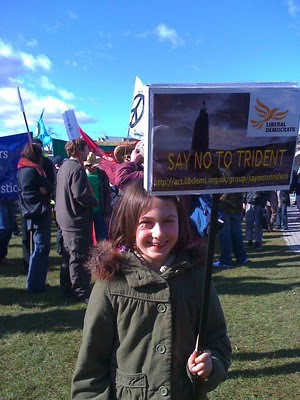 I was one of those Greenham Common women and I was never appalled at what we did. OK some women were a little more militant than others and didn't generate good publicity for the cause because of their actions but these were in the heady days of pre-spin, when it was done because you really believed in what you did and sod the consequences.....or so I like to think! The passion for the what we were doing and what we believed in is something that is sadly lacking in any form of protest and politics now. I think Swampy and his mates were the last of our kind.

I would do it all again too. In fact I still have my wire cutters somewhere.......

I glad you still have the cutters. Did you use the scrap of rag between the blades?
As I said Lindi, it is I that has changed, not yourself nor the good women of Greenham Common.