Brexit is going as expected. Ruined trade, broken pledges and ongoing assaults on human rights and the rule of law. It has led me to reflect on the root causes, and I mean the real baselines of what is going on.

After the vote to leave but before we actually did in 2020, the British public were promised many things. That we would be free of regulation from Brussels and ‘unelected bureaucrats’; a free nation negotiating exciting and buccaneering trade deals across the globe. Now, let’s take that all at face value. Could this government have predicted Covid19? Well, they were not the only government that missed the warning signs, so let’s be generous and say that a lot of countries were caught with their collective pants down. This blog post will not go further: it is not an attempt  to critique the government’s performance on Covid.

Less forgivable is the current energy crisis. This government has been in power since 2010. Up to 2015, The Conservative / Lib Dem Coalition mainly continued the previous Labour administration policy of encouraging renewable energy development, while mainly relying upon gas-fired power stations to deliver the majority of supply and nuclear power to deliver baseline electricity. While inadequate in many ways, at least there was a continued shift away from fossil fuels. Come the summer of 2015, after the Liberal Democrats were roundly punished by the British public, the Conservatives under Cameron got rid of the ‘green crap’. Support for small and medium scale renewable development was severely curtailed. The emphasis is, to this day, on only promoting large-scale renewable energy, deliverable only by corporations. While there still has been progress, it has been mainly in the area of offshore wind, with some solar. With the continued decline of North Sea oil and gas, any other shortfall is now made up by building electrical interconnectors to neighbouring nations and importing the deficit. In short, Britain is now more firmly plugged into the European energy grid than ever before, and with proportionally the highest level of fossil fuel imports since the 1970s. From 2004, the UK became a net importer of energy and as of 2018, 90% of UK imports has been in the form of oil and gas.

Where does this all relate to Brexit? Basically, for if there was for any chance of a positive outcome for Brexit, it would rely upon only the UK changing and the rest of the world basically staying the same. So while in terms of a global pandemic, it might be acceptable to give the Brexiters a pass, the same cannot be said of the current energy crisis. Why? Because there are always energy crises: OPEC in the 1970s, Iran and the subsequent Iran-Iraq War, the first Gulf War, Gulf War II, and now Ukraine. Energy crises are unpredictable in timing but like buses, they turn up in the end. In not addressing the issue seriously, in a fundamental sense the negligence of this Conservative government has put the national energy supply at risk and has sentenced us all to the massive price rises that we see today. 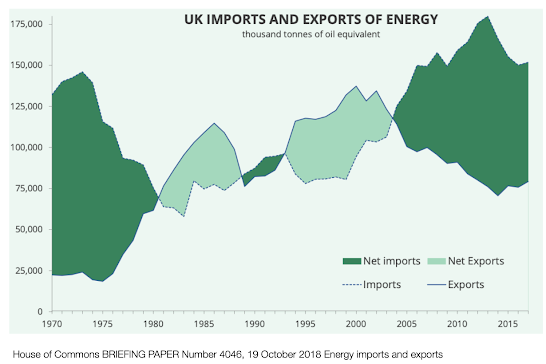 I could end this post right here but that is not what I set out to write. There is another perspective and this is the one which I have proposed since the start: that Brexit is designed to take Britain, us, to our knees. In previous blogs I have described Brexit as a coup, and there is nothing that has happened since that has persuaded me otherwise. The Ukraine crisis is being used by Johnson as a human shield in his very public support for the Zelenskyy regime, and the struggle against the Russian invasion and Putin’s naked aggression. Human rights are being crushed by the Police Bill which basically sets out to outlaw protest, and the assault of refugees by calling them illegals. Universal human rights are just that: universal. To take away human rights of some is an assault upon all. Hence the proposal for the UK to withdraw from the ECHR is a declaration of war by the government against every citizen. Just look at what Gove is proposing with the UK version of GDPR. By allowing the concept of vexatious challenges, and thus allowing corporations to charge individuals each time a person upholds their current rights, privacy basically will become the preserve of the rich. So we come to the point of Brexit: freedom. Freedom for corporations and the extremely rich, not for the masses.

What do the massively rich want to do with this freedom? This is the nub of the question. The current setup certainly does not inhibit anyone in terms of enjoying luxury. What do they want?

I was watching an old movie from the early Nineties the other week, The Silence of the Lambs.

First principles, Clarice: simplicity. Read Marcus Aurelius, "Of each particular thing, ask: What is it in itself? What is its nature?" What does he do, this man you seek?

Hannibal Lecter:
No, that is incidental. What is the first and principal thing he does, what needs does he serve by killing?

Hannibal Lecter:
No, he covets. That's his nature. And how do we begin to covet, Clarice? Do we seek out things to covet?

It is the same with the very rich and those who want to be. They covet. And as a society we have allowed this, one of the seven deadly sins, to become a virtue. What is more, the EU put limitations on corporate covetousness. It is true, these limits are not very strict but they exist and to organisations and people that are consumed by covetousness, that is intolerable, or, as former Conservative minister (now Lord) Eric Pickles described it, communism.

We have so idolised the sin of covetousness that as a nation there are many that are willing to support the destruction of human rights and our standards of living in the hope of benefiting from the current chaos and destruction, and to see destroyed those that stand against this grand project.

In Western mythology, there is a creature that embodies covetousness. They destroy in order to acquire what they desire and once wealth is gained, they do not tolerate challenges to their power and they certainly do not share.

The United Kingdom is rapidly becoming the abode of dragons.